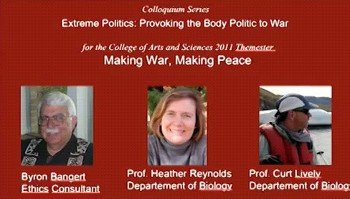 While many 9/11 truth events have been held on university campuses, sponsored by student and other groups, it is especially noteworthy when faculty members who particpate in university-sponsored colloquiums are able to focus on 9/11 truth issues and deep-state politics as part of the university’s outreach to its students and the public. Two members of Scientists, professors in the Biology Department at the University of Indiana, organized in the Fall of 2011 a special series of talks that was sanctioned by the University itself as part of a much larger offering by the University. These two professors, Heather Reynolds and Curt Lively, drew to the occasion other notable activists such as Niels Harrit (an organizing member of Scientists), Peter Dale Scott and Daniele Ganser from the University of Basel. They were joined in this endeavor by a third faculty member, Byron Bangert, Ethics Consultant.

Each year the College of Arts and Sciences in the University of Indiana sponsors a Themester whose primary audience is undergraduate students in the College and across the University. One of Themester’s priorities is to reach out to the community, state, and nation, including College alumni. The 2011 Fall Themester was titled “Making War, Making Peace,” and included well over 100 events open to the public. Under this umbrella, departmental sponsors within the College of Arts and Sciences, American Studies Program, undertook a lecture and colloquium series titled “Extreme Politics: Provoking the Body Politic to War?”

The final proposal submitted by Reynolds, Lively, and Bangert to the Themester Committee included three additional scholars, all vetted by the Chair of the Political Science Department, Russ Hanson. One of these scholars, Cass Sunstein (who is now with the White House’s Office of Information & Regulatory Affairs) is well known in 9/11 truth circles as the co-author of a 2008 paper with Adrian Vermeule, titled “Conspiracy Theories,” dealing with possible government risks and responses to false conspiracy theories. In the paper, the authors suggest the “cognitive infiltration of extremist groups,” of which 9/11 truth is cited as an example. Sunstein did not accept the invitation to speak at “Extreme Politics,” but a recent video indicates an effort on his part to distance himself from his constitutionally highly-questionable paper.

Also invited to participate in the colloquium series was Professor Daniele Ganser, a Swiss historian who specializes in international relations and international history from 1945 to today. Daniele Ganser is well known for his PhD thesis, “NATO’s Secret Armies. Operation Gladio and Terrorism in Western Europe” which was translated into ten languages. He teaches at Basel University. Ganser decided to videotape his presentation in English at Basel University when he gave it there on September 1, 2011. This presentation was then shown as part of the “Extreme Politics” series at the University of Indiana in the Fall. The video presentation is included here (below). Other presentations for the series are not available to the public, but include talks by Peter Dale Scott, Nafeez Ahmed, Lance deHaven-Smith, Andy Rotter and Niels Harrit, whose content can be discerned by following the links for each speaker below.

Talks and Speakers for “Extreme Politics: Provoking the Body Politic to War?”

The Terrorist Attacks of September 11 2001. What Do We Know Ten Years Later? A Historical Investigation Daniele Ganser (Historian and Peace Researcher, Basel University).

Getting Americans in and out of Wars: Some Historical Examples and Reflections Andy Rotter (Colgate University).

On 09/11/11, Daniele Ganser appeared on ServusTV, a division of “Red Bull”. This station airs in Germany, Austria and Switzerland via antenna or cable, and via satellite Europe-wide.

Those questioning the official story of 9/11 were Dr. Daniele Ganser, a Swiss historian researching 9/11 at the University of Basel (www.danieleganser.ch) and Prof. Dr.Friedrich Steinhäusler, an Austrian expert for physics and material science at the University of Salzburg (www.uni-salzburg.at). Steinhäusler is also an advisor for NATO for the war against terrorism.

During the discussion, the audience was clearly on the side of Ganser and Steinhäusler, whose main opponent, journalist Stefan Aust (former chief editor of “Der Spiegel”), tried without success to discredit their trustworthiness.

The full version of this discussion (in German) can be found here.