Our Resource Library aims to provide background information or a brief overview for the scientific articles, papers, and videos on our site. If you have suggestions for additional Topics, please contact the Coordinator.

During the destructions of the twin Towers, massive steel beams, weighing 4 – 20 tons or more, were ejected horizontally as much as 520 feet. Their motion can be examined as projectiles.

The horizontal distance traveled is given by distance = velocity x time.

This is a minimum velocity – air resistance will cause the horizontal velocity to decrease. Beams ejected at lower floors from WTC1, or beams that hit other buildings higher up than ground level, have less time to fall, and must therefore travel faster to reach a horizontal distance of 520 feet.

Large building components were ejected horizontally at speeds up to ~70 mi/hr.  A theory that buckling steel columns were severed and ejected with a spring action, a very unlikely occurrence, is not supported by the uniform debris fields and lack of observed rotation of steel beams seen in mid flight on videos. Extensive debris fields with ejected steel columns and sections of aluminum cladding surrounded the demolished towers on all sides for hundreds of feet. A very large proportion of the steel was projected outward. Only explosive force can explain the debris fields.

The official account of 9/11 dismisses this indisputable evidence by entirely ignoring it. The controlled demolition theory, on the other hand, readily explains this evidence. In a controlled demolition of a building, charges are placed so as to break the structure into pieces of manageable size for easy removal by truck. Thus, the steel columns were broken and ejected by explosive force. This evidence alone is quite enough to disprove the official account of 9/11.

Aluminum cladding (much lighter than steel) traveled over 600 feet.

For the cladding, velocity of ejection = 48 miles/hour minimum.

Air resistance would require a significantly higher velocity of ejection.

The cladding was on the outside of the steel perimeter columns. How does air expelled by falling matter blow the cladding off the columns with this velocity? Again, the ejection of the aluminum cladding to great horizontal distances points to the use of explosives for the Towers’ destruction.

All of the above physical processes were observed to have occurred at the WTC site during or after the building destructions. The temperatures required far exceed temperatures that would be expected from jet-fuel (kerosene) or office fires (1000 °C maximum under ideal conditions).

“Mo melts at 2,623 °C (4,753 °F), although addition of other elements may lower the melting point. No explanation of the high temperature needed to form the observed Mo-rich spherule is given in the USGS material (either published or obtained by FOIA action).”

The pile driver theory (Bazant and Zhou) maintains that, for each Tower, the upper portion of the building crushed the undamaged floors below. This theory is refuted in a fundamental but simple analysis of the motion of the WTC1 roofline by David Chandler.

In videos of the “collapse”of the North Tower, the WTC1 roofline is seen to move downward with an acceleration of 0.64g, where g is the acceleration due to gravity.

If the mass of the top block (12 stories) is M, and F is the upward force of resistance exerted on the falling block by the lower, intact structure, and a is the acceleration, then:

But, by Newton’s Third law of Motion (to every action there is an equal and opposite reaction), the falling block is exerting the same force, F, on the lower structure, that is, a force equal to 0.36Mg.

But when the tower was intact, the upper block was exerting a force of Mg on the lower structure, and the force of resistance was also Mg.

In any genuine post mortem investigation of thousands of deaths, the question of how the bodies and bones were fragmented is a very real issue. Such an investigation would probably provide yet more strong evidence for explosive demolition. But, like all the other evidence, those in authority have steered clear of such an investigation.

We might be able to make an estimate of the energy and physical dynamics required to convert a human body into bone fragments. It would a depressing endeavor though.

Here are some links to articles about the bone fragments found atop the Deutsche Bank, and in a manhole.

Pieces of Bone Are Found on Building at 9/11 Site

No researcher has mentioned finding bone fragments in the dust, it could be that they did not look for them, they were too small, or they were overlooked in studies that focused on the iron microspheres and red-gray chips. 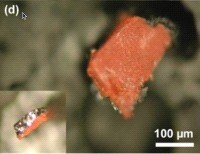 Professor Steven Jones first observed red/gray bi-layered chips in the WTC dust in June, 2007, and announced this discovery at a conference in Boston in December, 2007. Since then a major research effort by nine international scientists (Harrit et al) has detailed the nature of these chips. More recently, these results have been independently confrmed by chemical engineer, Mark Basile.

The chips consist of a thin red layer supported by a gray layer of homogenous material. The red layer is composed of two different types of particles embedded in a porous matrix: thin, flat plates typically hexagonal in shape, and faceted grains.

Signifiant features of the particles in the red layer are:

These are all features of a nano-engineered thermitic material. The equation for the thermite reaction is:

Such material could not have been formed as a result of the destruction of the Twin Towers. The red/gray chips are “active, unreacted thermitic material, incorporating nanotechnology, and a highly energetic pyrotechnic or explosive material.”

Jim Hoffman, “Thermitic Pyrotechnics in the WTC Made Simple,” April 26, 2009.