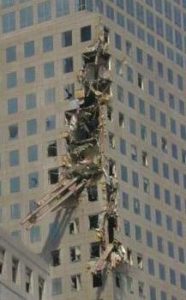 In a special report titled “The End of Bin Laden” (05/20/11), Time Magazine provides indisputable photographic evidence that the Twin Towers, WTC1 and WTC2, were destroyed by explosives, rather than by plane impacts and fires. Independent researchers have long maintained that some form of controlled demolition destroyed the Towers.

Scientists point to a two-page photograph on pages 48 and 49 of Time’s special report. The
photograph, taken in the vicinity of WTC1 by James Nachtwey, shows a maze of sections of exterior steel columns. Exterior columns were installed in sets of three, connected by spandrel plates. These units, about 30 feet in height, weighed 4 tons each. The short lengths of steel debris, suitable for hauling away, and pulverization of other components of the building, are themselves signs of controlled demolition

But the indisputable evidence is seen at far left. Impaled in nearby World Financial Center Building 3 (WFC3), at the 20th floor, are two exterior columns connected by spandrel plates. A close up of this portion of the Time photograph is shown at right.

Simple physics is used to calculate the minimum horizontal velocity with which the impaled columns were ejected from WTC1, the nearest tower, to hit the 20th floor of WFC3. The velocity is about 43 mph minimum. Other researchers have examined similar debris that hit the adjacent Winter Garden, deriving horizontal ejection velocities of 55 mph (Josef Princiotta). Some tower debris plumes and objects have been clocked at over 70 mph (David Chandler).

In reaching this value of 43 mph for the minimum horizontal velocity, we have used these numbers:

For the method of calculation, see Ejection of Steel Beams and Aluminum Cladding. If the columns had been examined, it might have been determined from which floor they emanated, since the thickness of the steel decreased as the height increased. Princiotta did identify some wall units that hit the Winter Garden as coming from floor 76. This identification was possible because of the taller windows used for the mechanical floor at floor 76.

If the columns stuck at floor 20 of WFC3 originated below floor 95 of WTC1, the velocity of ejection would be greater, so 43 mph is a minimum velocity. The effects of air resistance would increase this minimum value.

According to the National Institute of Standards and Technology, the Towers collapsed under gravity with the top portion crushing the lower portion of the building after a short period during which fires weakened the structures.

But in a gravity-driven collapse, the only force present (gravity) acts vertically downward. Air expelled between pancaking floors could not eject columns and other debris weighing tons with horizontal velocities of 43 to 70 mph. There were, in fact, no pancaking floors, since most of the concrete and floor contents were pulverized. A theory that buckling steel columns were severed and ejected with a spring action, a very unlikely occurrence, is not supported by the uniform debris fields and lack of observed rotation of steel beams seen in mid flight on videos. Extensive debris fields with ejected steel columns and sections of aluminum cladding surrounded the demolished towers on all sides for hundreds of feet. A very large proportion of the steel was projected outward. Only explosive force can explain the debris fields. For a visual explanation of WTC1’s destruction, see David Chandler’s video.

For more information and background on the U.S government’s recent announcement about Osama bin Laden, see, for example,
911Truth and 911Blogger.