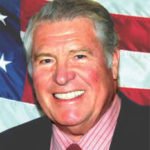 Present or Most Recent Position: National Commander, “The Patriots”

Statement on 9/11: “The truth about 9/11 is that we don’t KNOW the truth about 9/11, and we should. There is mounting evidence of possible complicity by elements of our own government. If they have nothing to hide, why are they hiding everything? Why are they hiding audiotapes of FAA and NORAD controllers? Why are they hiding videotapes of whatever hit the Pentagon? Why are they hiding the black boxes? Why did they destroy most of the forensic evidence which appears to show that three buildings at the World Trade Center were brought down by thermite demolition charges? The above are but a tiny fraction of the unanswered questions not even raised by those who “investigated” the 9/11 tragedy. The most unbelievable of all the conspiracy theories surrounding 9/11 is the OFFICIAL conspiracy theory told us by our government.”

Additional Information: Robert Bowman is a Lt. Col., USAF, retired, who flew 101 combat missions as a fighter pilot in Vietnam and directed all the DoD “Star Wars” programs under presidents Ford and Carter.