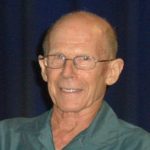 Statement on 9/11: “I calculated the downward acceleration of the roof of WTC 7, and found it was very close to free fall, so close that the complete severing of the support columns would be required to account for the motion. Only explosives could do this. I then studied the motion of the twin towers and found that they too had come down too fast. In short, the evidence for explosives in controlled demolition of all three buildings is convincing, and the failure of NIST to consider this possibility is prima facie evidence of corruption.”

Additional Information: “My prior work experience includes agriculture, farming, research into the manufacture and use of biodiesel, and development of a patented solar tracking device.”

Frank Legge was for a number of years co-editor of the Journal of 9/11 Studies.

Frank Legge, What Hit the Pentagon? Misinformation and its Effect on the Credibility of 9/11 Truth, July, 2009. Updated Version January, 2015.

Frank Legge and David Chandler, The Pentagon Attack on 9/11: A Refutation of the Pentagon Flyover Hypothesis Based on Analysis of the Flight Path, Sept., 2011 and the Addendum, December 27, 2011

Numerous papers on this site and the sites below: