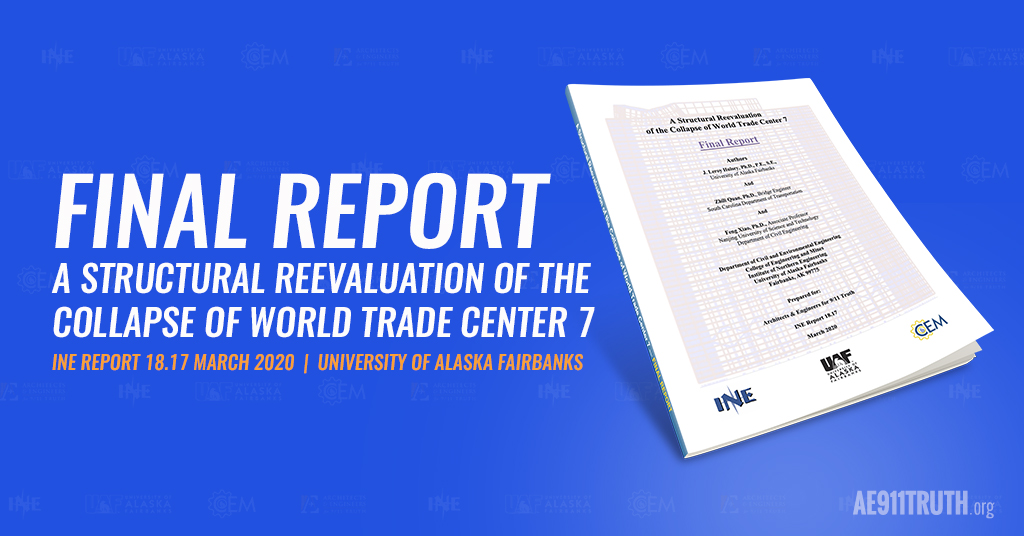 Architects and Engineers for 9/11 Truth funded this multi-year project at the University of Alaska, Fairbanks, to model the structure and assess the possible collapse mechanisms of WTC 7.  The conclusions of the study make it clear that fire and progressive collapse were not the mechanisms that brought the building down.

Simple observations show that WTC 7 fell at or near freefall.  Measurements show that it fell at actual freefall.  Highschool physics is all it takes to conclude that there was no resistance, and therefore the massive amounts of actual structural resistance had to have been completely and suddenly removed by demolition charges.

However, those who have been skeptical of any explanation that deviates from the official story maintained that somehow the structural details would allow for some kind of progressive collapse.  This project, by a research team led by Dr. Leroy Hulsey, lays all those fantasies to rest.  It builds a complete finite element model of the building, including every structural member.  The model could then be altered to simulate various kinds of damage to try to get it to fail as observed in real life on 9/11.  The conclusions are inescapable: fire could not have caused the observed failure.  This study reinforces the conclusions of other researchers, that the collapse of WTC 7 was the result of demolition by preplaced explosives.