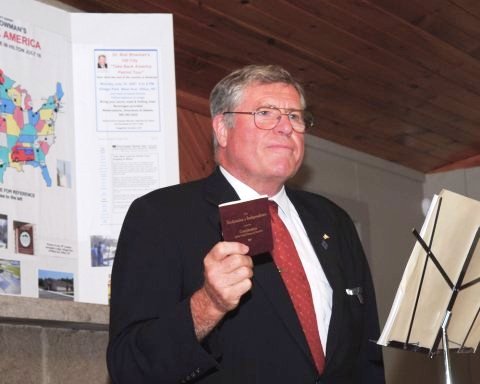 A great American patriot, 9/11 truth advocate, and fighter for truth and justice, Dr. Bob Bowman, passed away in his Florida home on August 22, 2013.

Bob Bowman’s illustrious career spanned almost five decades that at first included military and government service at high levels. In later years, Bowman founded an organization known as the Patriots that included many individuals with military and government experience and credentials. As part of this activity, Bowman travelled the country delivering speeches to a wide variety of groups working for peace and a more democratic society, including the 9/11 truth movement. In one of his better known speeches, the so-called Inaugural Speech, Bowman laid out what he would do if elected as President of the United States.

In higher education, Bowman was an outstanding student who in 1966 gained a PhD in Aeronautics and Nuclear Engineering from the California Institute of Technology. As a Lieutenant Colonel for the United States Air Force, Bowman completed a remarkable 101 combat missions. Professor Bowman taught at five colleges and universities, serving as Department Head and Assistant Dean. He has lectured at the National War College, the United Nations, Congressional Caucuses, the Academies of Science of six nations, and the House of Lords. He served as Director of Advanced Space Programs Development for the US Air Force under Presidents Ford and Carter. He was an early public critic of the Strategic Defense Initiative (SDI, aka “Star Wars”) during the Ronald Reagan administration. In the 1980s and 1990s, Bowman strove to expose the lie that “Star Wars” was a purely defensive project. It was during this period that he founded “the Patriots.”

Because of his experience as a fighter pilot, Bowman especially challenged the story of hijacked planes flying around on 9/11 for almost two hours without being challenged, saying that “every time a commercial plane goes significantly off-course, a military fighter plane shows up next to it within about ten minutes. The fighter pilot rocks its wings as a signal to ‘follow me’ and get back.”

For several years Bowman was active with Veterans for Peace and Vietnam Veterans Against the War as a speaker. In 2000, he campaigned nationwide for, but did not receive, the nomination of the Reform Party of the United States of America for President of the United States In 2006 Dr. Bowman ran for Congress in an effort to unseat long-term Republican incumbent Dave Weldon in the historically Republican 15th Congressional District of Florida. Campaigning as a 9/11 truth candidate, he won the Democratic primary and, despite being outspent by his opponent by a ratio of thirty to one, received 97,947 votes to Weldon’s 125,596. These counts came from electronic voting machines.

Bowman was a member of many organizations including Scientists for 9/11 Truth. A statement on his member page reads:

“The truth about 9/11 is that we don’t KNOW the truth about 9/11, and we should. There is mounting evidence of possible complicity by elements of our own government. If they have nothing to hide, why are they hiding everything? Why are they hiding audiotapes of FAA and NORAD controllers? Why are they hiding videotapes of whatever hit the Pentagon? Why are they hiding the black boxes? Why did they destroy most of the forensic evidence which appears to show that three buildings at the World Trade Center were brought down by thermite demolition charges? The above are but a tiny fraction of the unanswered questions not even raised by those who “investigated” the 9/11 tragedy. The most unbelievable of all the conspiracy theories surrounding 9/11 is the OFFICIAL conspiracy theory told us by our government.”