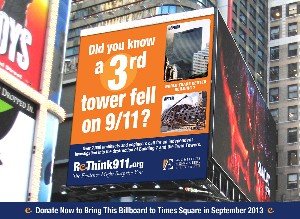 The ReThink911 Campaign is a global 9/11 anniversary campaign involving 11 major cities around the world together with grassroots actions at the local level that include the use of transit advertising, bumper stickers, lawn signs, and so on. ReThink911 is sponsored by Architects & Engineers for 9/11 Truth, a 501(c)3 non-profit organization, and Remember Building 7, a campaign by 9/11 family members to raise awareness of Building 7. The campaign is supported by a coalition of more than 40 organizations that include Scientists for 9/11 Truth. Donations are actively solicited.

The focal point of the campaign message is World Trade Center Building 7 (WTC7), a 47-storey skyscraper that came down on the afternoon of 9/11 in a manner highly suggestive of a controlled demolition. The building was not hit by a plane. The official account of this event attributed the “collapse” to small office fires. The billboard planned by ReThink911 for Times Square, New York City, is shown in the photograph here. The campaign begins September 1 and will last the entire month. The Times Square billboard will remain in place until the end of October.

The conclusion by independent scientists and others that WTC7’s destruction was a controlled demolition is supported by a large amount of physical, eyewitness, and other evidence. Most notably, the sudden onset of collapse was followed by a period in which the building fell over 100 feet in free fall. This was shown by Scientists’ member David S. Chandler and presented during the public comment period, forcing the government scientists to back down on their claim that no physical laws were violated by their theory of collapse caused by the thermal expansion of girders. For more information, see Evidence for WTC7 Ignored or Unexplained By NIST (National Institute of Standards and Technology) on this site. For further reading, see Freefall and Building 7 on 9/11 by David Chandler and the book “The Mysterious Collapse of World Trade Center 7” by David Ray Griffin (Olive Branch Press, 2010).

A poll sponsored by ReThink911 on the 12th anniversary of 9/11 reveals that one in two Americans have doubts about the government’s account of 9/11. A new national survey by polling firm YouGov showed video footage of World Trade Center Building 7’s collapse. After viewing the video, 46% suspect that it was caused by a controlled demolition. Building 7, a 47-story skyscraper, collapsed into its own footprint at around 5:20 pm on 9/11.

Last week saw an unprecedented outpouring of activity to educate the public about 9/11 and spearhead a new investigation. On the streets of New York City and other cities around the world there was a renewed energy and hope for turning the tide. Meanwhile, ReThink911 made its first major breakthrough into the mainstream news with Time US’s coverage and with the controversy that has erupted across Canada in response to ReThink911’s Ottawa bus ads.

In the the morning of September 11, ReThink joined 30 other 9/11 groups in observing a vigil and distributing brochures at Ground Zero. Groups then marched up the street to the New York City Council to deliver ReThink911 VIP Packs to all 51 council members. After that groups went via the subway to Democracy Now, then marched to the New York Times, MSNBC, FOX, CNN, CBC and ABC to deliver more VIP Packs.The day ended in Times Square under ReThink911’s towering 54-foot billboard with a historic rally featuring renowned speakers Dr. William Pepper, Former Congresswoman Cynthia McKinney, Richard Gage, AIA and several other inspiring voices.

This article from Times Magazine on September 11, 2013 discusses Building 7, touches briefly on the Pentagon, and details some of the finances of Architects & Engineers. The article quotes the National Instutute of Standard and Tecnology (NIST) statement reqarding the destruction of Building 7 and the subsequent findings of Architects and Engineers:

“The heat from the uncontrolled fires caused steel floor beams and girders to thermally expand, leading to a chain of events that caused a key structural column to fail,” the NIST concluded. “The failure of this structural column then initiated a fire-induced progressive collapse of the entire building.”

“In 2006, Richard Gage, a San Francisco-based architect, founded Architects and Engineers for 9/11 Truth, which doubts Building 7 collapsed because of fire. Gage and other architects and engineers argue that 7 World Trade Center came down in a free fall, which could only have been cause by a deliberate demolition explosion. More than 2,000 architects and engineers have signed a petition calling for a new investigation into the building’s collapse.

Read the Time article at Time Article on ReThink911.


A controversy has erupted in Canada over placement of ReThink911 ads on Ottawa Buses and a Toronto billboard. Ads in 300 buses in the Ottawa transit system have been questioned.

While the Chair of the Ottawa Transit Commission, Ottawa councillor Diane Deans, called the ReThink911 ads “insensitive” and said she would request a review of Ottawa’s advertising policy, the Mayor, Jim Watson, weighed in to say the ads were “disrespectful” yet “protected by free speech”. The Ottawa Citizen published an editorial arguing for the right to place the ReThink911 ads on Ottawa buses.

See Ottawa City Transport Should Err on the Side of Free Speech.

The ReThink911 organization responded to the Ottawa officials’ criticisms, writing in part:

“To Councillor Deans and to all who question our sensitivity and legal right to run the ReThink911 ads, we would like to make clear: the ReThink911 coalition includes 9/11 victims’ family members who want nothing more than an accurate and unbiased accounting of the death of their loved ones,” the statement says.

“To these surviving family members, seeking the truth is the most profound way to honor their loved ones.”

See the article at 9/11 truther campaign responds to criticism of bus ads.

[Portions of this article were adapted from those on the ReThink.org website.]